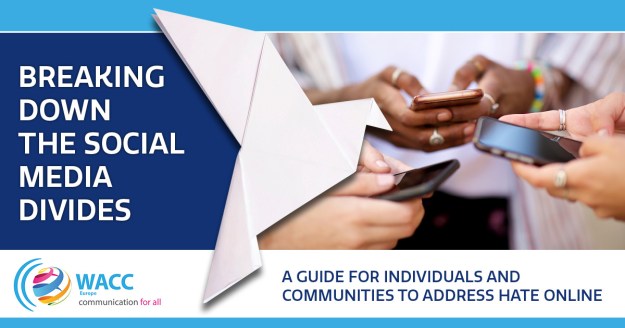 What can be done to counter hate speech on the internet and in social media at time when online intolerance is widespread, and threatens democratic debate in societies?

A webinar on Tuesday 13 October at 10:00 am (Central European Time) will discuss ways to address hate speech online and create a space for conversation in which all people are able to express themselves in a respectful and dignified manner.

Register in advance for the webinar at http://bit.ly/SocialMediaDivide

The webinar marks the launch of a new report and resource kit – Breaking Down the Social Media Divides: A Guide for Individuals and Communities to Address Hate Online – produced by WACC Europe, the European region of the World Association for Christian Communication.

The online launch will introduce the report and guidelines, hear from people who respond to hateful content in their personal and organisational social media, and learn of other efforts in Europe to counter hate speech.

At the launch will be:

This report itself includes case studies, tips and strategies, as well as resources for further action and specific examples of how people have responded to hateful online content.

It is aimed at being a resource particularly for individuals, small organisations, and community groups, such as churches, which may not have extensive expertise in managing social media, but want to start engaging when they see hateful content on the internet.

Stephen Brown, president of WACC Europe, said: “As social media is now a feature of our lives, we need as individuals and communities to find ways to break down divides, to build conversation, and to promote diversity and respect online.”

The report and guidelines come out of a one-year project to identify and promote strategies to counter online hate speech particularly focused on refugees and migrants, supported by the Otto per Mille Fund of the Waldensian Church in Italy.

According to a December 2018 survey by the European Commission, xenophobia (including anti-migrant hatred) was the most common type of hate speech reported to social media companies.

The focus on social media comes out of previous media monitoring conducted in seven European countries by WACC Europe and the Churches’ Commission for Migrants in Europe.

WACC Europe promotes communication as a basic human right, essential to people’s dignity and community. Rooted in Christian faith, WACC works with all those denied the right to communicate because of status, identity, or gender.

The report will be available online on 13 October at 10:00 am Central European Time at www.wacceurope.org/nohatespeech