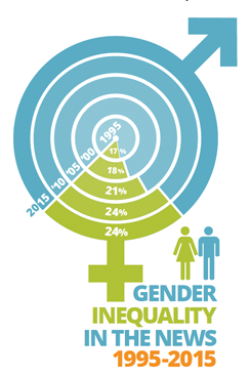 The first such survey was conducted in 1995, and at five-year intervals after that. The results of the 2015 media monitoring exercise found that progress towards equality of women and men in the news media has virtually ground:

Worldwide, women make up only 24% of the people heard, read about or seen in newspaper, television and radio news, exactly the same level found in 2010.

Women’s relative invisibility in traditional news media has crossed over into digital news delivery platforms. Only 26% of the people in Internet news stories and media news Tweets combined are women.

There is a global glass ceiling for female news reporters in newspaper by-lines and newscast reports, with 37% of stories reported by women, the same as a decade ago.

The 2015 report includes data from 114 countries and provides analysis and case studies at global, regional and national levels. Proposals made in the GMMP Regional Report for Europe to improve women’s inclusion in the media’s news agenda include:

The full GMMP 2015 Regional Report for Europe (in English) is available in PDF format at: http://bit.ly/GMMP-Europe-2015