Refugees and asylum-seekers seeking protection in Mexico will soon be producing podcasts about their lives and experiences with help from a WACC-supported project initiated by its local partner, La Sandia Digital.

In the absence of stories featuring the voices and perspectives of people on the move, “we decided to let them speak about their own experiences without an intermediary; they don’t answer to any journalist, they are not being interviewed, they just talk about themselves, so that they become more than a number and a report,” said Marie-Pia Rieublanc, project manager at La Sandia Digital, a Mexico City-based civil society organization focused on gender justice, environmental justice, and communication for social change.

“To counter xenophobic narratives, we decided to focus the stories that each of them brings from their home country — from their education, their cultural heritage, their inner strengths and what they would like to provide, what dreams they have for their future in Mexico or in the United States,” she added.

“As a result of the complex human rights and economic conditions in Central America, since 2018 thousands of people from this region have decided to leave their country and head to the United States,” explained Lorenzo Vargas, WACC Communication for Social Change project manager. “The vast majority of these migrants have to transit through Mexico, and many end up staying when they realize just how difficult it is to enter the United States.”

Vargas noted that the Mexican Commission for Refugee Aid (COMAR) received 70,302 asylum applications in 2019, 57% more than in 2018, mainly from Honduras and El Salvador. “The majority of migrants are fleeing violence, impunity and extreme poverty. A significant number of them are women and adolescents,” he said.

The project — Migrant Voices: Freedom of Expression & Access to Information in Mexico — seeks to empower 20 women in transit and at destination in Central Mexico to use digital and other communication tools to access information, challenge xenophobic discourse, and share their concerns within their communities and with the wider society. They become “citizen journalists in their own right,” said Vargas.

“The skills and knowledge they will gain, particularly on their right to information and freedom of expression, will also enable them and other migrants to access vital information about services (especially related to healthcare, food and shelter, and safe migration pathways) and legal entitlements,” he added. It will help them exercise other rights such as freedom of movement, right to seek asylum, right to access consular services, right to healthcare, right to justice, and to security of the person, he said. Participants will also receive specialized support on documenting abuses perpetrated by state authorities. 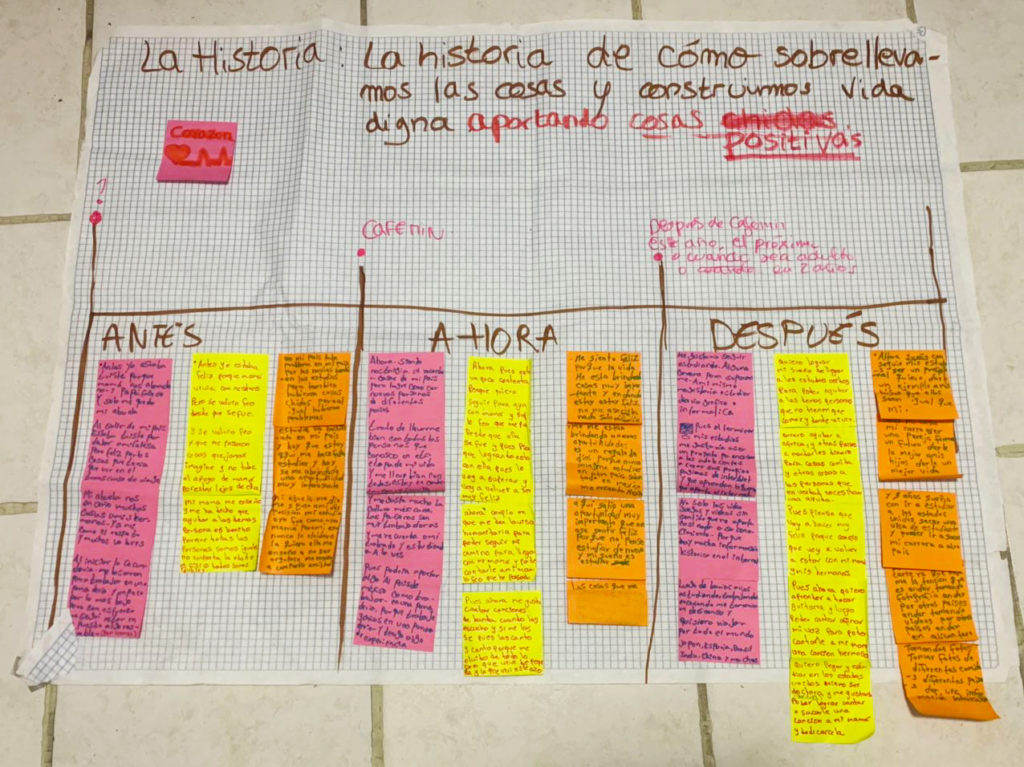 A workshop with adolescent refugees helps them recall difficulties they have overcome in their lives in order to build a dignified life.

Before embarking on training workshops, La Sandia Digital conducted a desk-based research and analyzed Twitter discourse on migrants and refugees. Based on the findings, they not only decided to focus the podcasts on the voices of refugees and asylum seekers, but “to place the project at the center of a historical moment when Mexico is becoming a destination country for displaced people and for people who have to seek protection [here] as they can no longer enter the United States,” said Rieublanc.

Hackeo Cultural, which conducted the Twitter analysis noted that migration was not a big issue in the digital press between June and September 2020. “There wasn’t any ‘migrant caravan’ until October. Closed borders, travel restrictions and the economic crisis made a lot of Latin American and Caribbean people decide to postpone their migration process during the pandemic,” said Rieublanc.

However, there were articles and tweets reporting official statements from the American and Mexican governments about migration restrictions and Covid-19 measures, she said. there were also official reports about migration and the impacts of the pandemic on migration in the region, published by international organizations like the UNHCR. “Migrants and refugees were only numbers and trends, not stories, not lives,” she noted.

There was also an increase in “xenophobic narratives,” mostly coming from the American and Mexican governments that presented migrants and refugees as a danger to public health, said Rieublanc.
Its research on migration also showed that “Mexico is becoming a destination country for thousands of Latin American and Caribbean people, instead of being only a country of mass emigration and a transit state for a population seeking to migrate to the United States,” said Rieublanc. The number of asylum-seekers — mostly from Honduras, Venezuela, El Salvador, Guatemala, Cuba, Nicaragua and Haiti — has been rising, she said.

In addition, the number of unaccompanied minors entering Mexico through the Guatemalan border either to seek asylum in Mexico or in the U.S. is increasing, she said. “They represent a big human rights issue for the Mexican government who used to detain this population in migration stations regardless of the international laws that prohibit the detention of minors,” she said. Since September 2020, however, there have been a series of legal reforms prohibiting their detention, and more refugee shelters have been set up, she added.

Photo above: Women refugees take part in a workshop to help them prepare their personal narratives. Courtesy of La Sandia Digital