William F. Fore, who has died aged 92, was President of the World Association for Christian Communication (WACC) from 1982 to 1990.

Graduating from Occidental College, he received his BD degree from Yale University Divinity School and in 1971 a PhD from Columbia University and Union Theological School.

Fore was ordained in the United Methodist Church and was a member of the California-Pacific Conference. 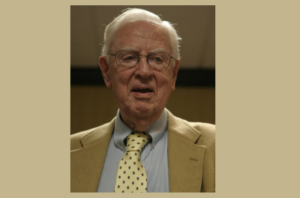 In 1953, he produced the USA’s first children’s religious television programme and shortly after worked for CBS television to bring “Exploring God’s World” to network TV.

From 1955 to 1963, he was Director of Visual Education of the Methodist Board of Missions in New York City, producing documentary films, filmstrips, records and television programs.

In 1964, Fore became Executive Director of the Broadcasting and Film Commission of the National Council of Churches, a post he held for 25 years. During that time he supervised television and radio programs on ABC, CBS and NBC, and engaged in government liaison.

In 1971, he co-founded The National Coalition Against Censorship, and served as chair for 17 years, according to a published obituary. “The Coalition continues to aid local libraries and other organizations facing censorship of books and films.”

Fore became a much-quoted figure during the 1987-88 US TV evangelist scandals. His book, Television and Religion: The Shaping of Faith, Values and Culture, was published one month after the Jim Bakker scandal first hit the nation’s front pages in March 1987.

In 1989 he accepted a position as Adjunct Professor at Yale Divinity School, and taught communication and cultural studies there for five years. It was during that period that he wrote Mythmakers: Gospel, Culture and Media (1990).

Bill Fore was always a staunch – if critical – supporter of WACC’s vision and mission. Contributing to WACC’s history 1975-2000, “A Labour of Love”, he wrote, “WACC is one of the only organizations in the world which can enter places where decision-making is taking place and represent the interests of ordinary people against the principalities and powers which are rapidly dominating the communication spectrum.”

WACC offers its sympathy and condolences to his family and friends, while celebrating a life distinguished by tireless dedication to media reform and communication ethics.