In Latin America, the “pink tide” governments of the first decade of the 21st Century transformed the movement for communication rights by introducing far reaching media reform legislation. As a second wave of progressive governments are elected, the region has a new opportunity to move towards the democratization of increasingly fragmented and digitized communication ecosystems. Since 2018, with the election… Read more » 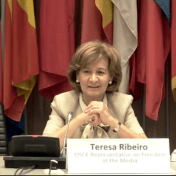 Khan was one of the panelists at Gender Justice: Advancing Pluralism and Free Speech for All, a forum organized July 13 by the Organization for Security and Co-operation in Europe’s (OSCE) Representative on Freedom of the Media. [Watch video here.] The other panelists were Sarah Macharia, coordinator of WACC’s Global Media Monitoring Project (GMMP) and general secretary of the Global… Read more »

Seventy-one Indigenous communicators from 17 community radio stations in Honduras and Guatemala have received extensive training on how to develop new content about issues affecting remote communities as part of a project supported by WACC and Cultural Survival, a US-based NGO.  The project also provided specialized training to 32 participants (15 women, 17 men) who became members of a network… Read more »